Review of Arthur Miller's Death of a Salesman

"You can't eat the orange and throw the peel away--a man is not a piece of fruit!"

"He is not the finest character that ever lived. But he's a human being, and a terrible thing is happening to him. So attention must be paid… A small man can be just as exhausted as a great man"

I did not want to begin my thoughts on the brilliant contemporary classical play The Death of a Salesman by Arthur Miller with a controversial opening line that causes people who have already read the play to squirm, while leading people who haven't read it to form an incorrect impression of the play, so I made the said sentence the subsequent line. The protagonist of Arthur Miller's Death of a Salesman, Willy Lomar, constantly reminds me of Donald Trump. Take away the vileness from Trump, erase his unlikely success, peel away his knack for evading consequences, and discount his unearned money -- made through inheritance, con and grift – what you have is a Salesman who is a mass of contradictions, but propels himself through his strong beliefs, regardless of their veracity. 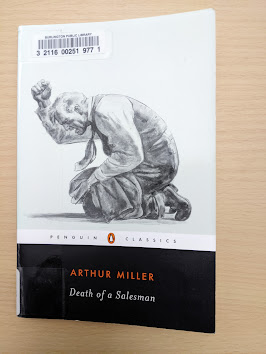 The Death of a Salesman works on two levels - as a portrayal of a capitalistic society that overvalues success of a narrow definition; and as a relationship drama of a flawed father and son duo who drift apart in values, but are held together by a taut, thin thread of love burdened by betrayal. Arthur Miller masterfully interweaves the two, resulting in a searing indictment of pernicious aspects of the society. America relies heavily on a culture of toxic positivity, with politicians constantly referring to its greatness and alleged exceptionalism with phrases such as “this is America!” even as close to a million people die of a pandemic. Willy Loman, an ageing salesman, represents this mindset of positivity and hope, his personal motto being “because the man who makes an appearance in the business world, the man who creates personal interest, is the man who gets ahead. Be liked and you will never want." The Death of a Salesman is, at its purest form, a description of the last day of Willy’s life, as he grapples with the betrayal of society, his own betrayal of his family, and in turn, the betrayal of his sons.

Miller’s characterization is top-notch, and his narrative structure shifts seamlessly between the present and an idyllic past, between reality and imagination, and between rationality and schizophrenia. Willy Lomar's monologues and dialogues constantly shift between self-doubt (“They seem to laugh at me”) and confidence (“I’m well liked”) in a single breath. His elder son, Biff, turns from being a promising and charismatic athletic adolescent with a bright future to a kleptomaniac adult filled with self-doubt : "I don't know--what I'm supposed to want". The second son, ironically named Happy, is a shallower version of his father, with his ambitions being summed up as "My own apartment, a car, and plenty of women" and "I got to show some of those pompous, self-important executives over there that Hap Loman can make the grade." The glue that holds together this family is the mother, Linda. She balances reality and day-to–day affairs with hopes and dreams, and plays along with Willy’s vision for a better future, leading one of her sons to remark "What a woman! They broke the mold when they made her." My favorite is the next-door neighbor Charley, who acts as a counterfoil, and a more hopeful vision of America. He gets to deliver some of the wisest lines such as “The only thing you got in this world is what you can sell. And the funny thing is that you're a salesman, and you don't know that” and “My salvation is that I never took any interest in anything."

The Death of a Salesman is so vividly written that one can visualize the scenes playing out on a stage. The emotional beats are very effective; and as Willy Lomar desperately attempts to leave some legacy ("I've got to get some seeds, right away. Nothing's planted. I don't have a thing in the ground."), one can not help but sympathize. The introduction by Christopher Bigsby is penetrating as well, and he sums up the mindset of Willy Lomar as "When today fails to offer the justification for hope, tomorrow becomes the only grail worth pursuing." But what accentuates this play is the dynamic dialogue and the familial dynamics, with people bound together through love and hate; respect and “spite”; and hope and regret. If Willy Lomar were alive today, he would probably wholeheartedly believe a Trumpist pitch. But in another life, Willy may realize the validity of Biff’s observation when Biff says “Pop! I'm dime a dozen, and so are you!". The Death of a Salesman is a highly recommended read.