"It may not be nice to be good, little 6655321. It may be horrible to be good.. What does God want? Does God want goodness or the choice of goodness? Is a man who chooses the bad perhaps in some way better than a man who has the good imposed upon him?.. And yet, in a sense, in choosing to be deprived of an ability to make an ethical choice, you have in a sense really chosen the good. "

I woke up early this morning hoping to force myself to write a review of The Clockwork Orange by Anthony Burgess. After all, I started this year resolving to pen my thoughts about every book I read, and have struggled to write coherently ever since. Having a mobile phone at an arm’s length does not help, and true to form, I started browsing “a bit” for “distraction”. This morning's content of choice was a set of videos posted by a documentary filmmaker who, along with his wife, was taunting a masked group of the white supremacist and neo-Nazi Patriot Front marching in and around Boston yesterday. One could even say that the documentary filmmaker was deliberately trying to provoke the group, testing the limits of his free speech in a way. The videos distil why it is difficult to read and review Anthony Burgess’s 1962 classic in the present day and age. Today’s date is not without significance as well. It is 4th of July in the United States, a day commemorating the country’s declaration of independence. It is as good an occasion as any to attempt to pen one’s thoughts on Burgess’s thought-provoking study on free will and determinism. 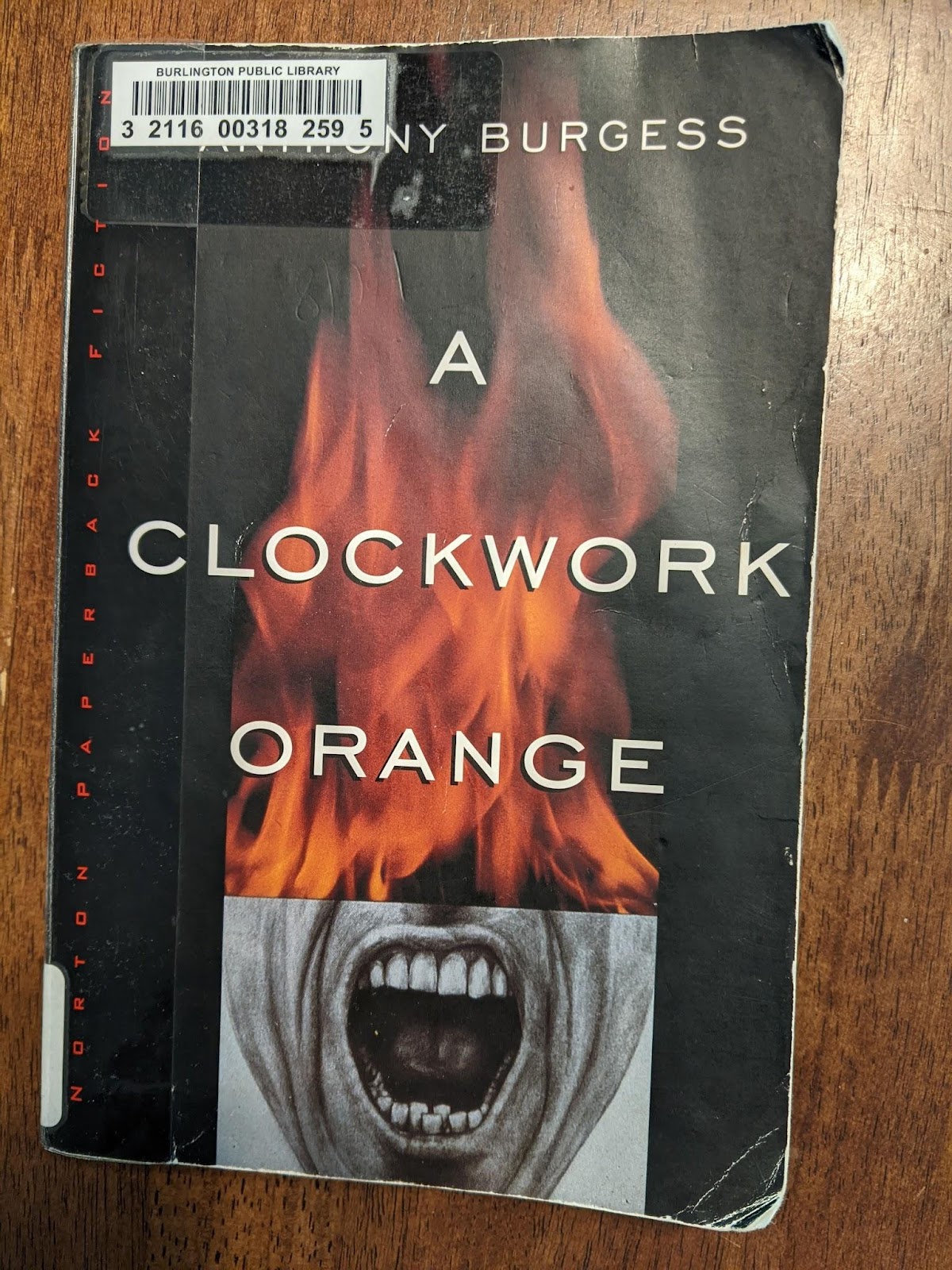 My introduction to The Clockwork Orange, like that of most people, was through Stanley Kubrick’s movie adaptation. In fact, The Clockwork Orange was the movie that made me take notice of Kubrick as a director. The 1986 America edition that I read has an introduction by Burgess where he rues the fact that his literary oeuvre is represented by, and often only by, The Clockwork Orange, thanks to Kubrick. Burgess has plenty to say on the movie adaptation, but he calls the book itself “too didactic to be artistic”, since “the moral lesson in this book sticks out like a sore thumb”. The heart of his discontent is the 21st chapter. As a prolific music composer, Anthony Burgess structures The Clockwork Orange as 3 sections of 7 chapters each. When initially published in the USA in 1962, the publisher insisted on publishing the book without the final chapter (the chapter was reintroduced a quarter century later). Stanley Kubrick based his screenplay on the American version of the book, and did not see the point of the 21st chapter even though he became aware of it before filming his movie. So, what’s it about the 21st chapter, apart from structural integrity, that is so polarizing? In Burgess’s view, the 21st chapter is the “denou-ment” that turns the novel from being “a fable” or “an allegory” into a genuine fiction. This is because, Burgess believes, fiction as a work of art needs a character transformation. The American publisher, on the other hand, believed that the original ending was  “bland and it showed a Pelagian unwillingness to accept that a human being could be a model of unregenerable evil”. "My book was Kennedyan and accepted the notion of moral progress. What was really wanted was a Nixonian book with no shred of optimism in it", Burgess remarks. Notice the reference to Richard Nixon, which is not insignificant.

Burgess is, hence, an author of the classic bend. He derives his morality from a formerly heretical sect(s) of Christianity in the 5th century A.D. – Pelagianism – encompassing a set of beliefs that did not accept the idea of “original sin”. Man does not inherit the sin of Adam simply because one can only be held accountable for their own sins. One can be good, or evil, and has the complete free will to choose between the two. This is the central theme of The Clockwork Orange. Should mechanistic morality be imposed on a creature oozing juice and sweetness?

The second regret Burgess has is his use of the Nadsat language – Anthony Burgess’s own creation of a slang language that borrows heavily from Caucasian languages, with a mix of cockney colloquial words and school boyish rhyming phrases. The novel is a first person narrative by Alex, the fifteen year old protagonist, and Alex’s use of the slang permeates the book. Some people just read through until they get used to the language, while others give up on the book. I, on the other rooker, my brothers, skorrily ittied to a dictionary whenever I viddied a new slovo. This, of course, hindered the pace of my already slow reading.

The Clockwork Orange begins with Alex, the fifteen year old narrator, who is enjoying a Milk Plus – milk plus any drug of your choice – with his friends at the Korova Milk Bar (pictured by Kubrick later through a memorable zoom out shot). Alex is the youngest, but the most cunning member and the de facto leader of the gang. Soon we see that Alex’s life outside his school is one of “ultra-violence” : rape, thievery, and violence just for the sake of it. When caught, he volunteers for a novel reformative treatment introduced by the new Government - Ludovico’s technique. A form of behavioral conditioning, this technique attempts to create a subconscious association between violence, music and nauseating symptoms. However, is such a treatment moral? And will it be effective?

This is not an easy book to read, thanks to its invented language. The violence could also be a turn-off for many readers. The Clockwork Orange is a novel of ideas set in a dystopian setting and following the tradition of Huxley's The Brave New World. However, I found Burgess’s work to be much more enjoyable thanks to the wit of the protagonist, Alex. Alex is also self-aware to an extent. At one point, he goes into this rumination explaining his actions :  "But, brothers, this biting over their toe-nails over what is the cause of badness is what turns me into a fine laughing malchick. They don't go into what is the cause of goodness, so why the other shop? ... More, badness is of the self, the one, the you or me on our oddly knockies, and that self is made by old Bog or God and is his great pride and radosty. But the not-self cannot have the bad, meaning they of the government and the judges and the schools cannot allow the bad because they cannot allow the self. And is not our modern history, my brothers, the story of brave malenky selves fighting these big machines?”. He sums this up simply as “what I do I do because I like to do."

In short, Burgess’s protagonist is an amoral creature caught in a fictional work of the classic bend. No wonder then that the final chapter seems sudden and forced. Burgess is clever enough to connect the fact that Americans loved the nihilistic 20-chapter novel and its movie adaptation with the rise of Richard Nixon. And reading this book today is jarring, knowing that the rise of Nixon set the stage for the current rise of Donald Trump, and with him, the neo-Nazis of the U.S.A. It is probably only me, but Alex’s use of endearments like “my brothers” and his tendency to refer to himself as “Your Humble Narrator” constantly reminded me of Trump, and his self-referential “your favorite President”. As if that’s not enough, Alex seems to obsess over cleanliness while Trump is reportedly a germaphobe. Unfortunately, reality more often follows the structure of an allegory than the structure of fiction. Nevertheless, The Clockwork Orange is worth a read.