It is hard to classify Marjane Satrapi’s Persepolis. The medium is Bande_dessinée – a French precursor of what English readers would come to term as the graphic novel. But this is not a novel, it is a memoir of a teenager growing up in tumultuous times in Iran. Marjane Satrapi’s narration starts during the Iranian revolution which ultimately led to the overthrow of Iran’s last Shah belonging to the house of Pahlavi. We then go into a brief flashback to get introduced to Satrapi as a kid, her parents, and her grandmother. Marjane Satrapi grows up in an upper middle class household which is not particularly religious, and her writing has a sparkling sense of humor, conveyed both through her words and illustration. There is profundity, but Satrapi does not dwell on it. 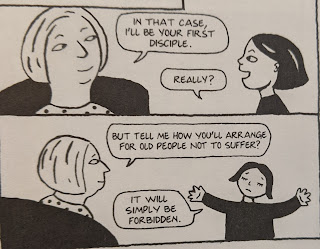 Satrapi, as many great writers, grows up with books. And she soon discovers communism, thanks to a leaning towards Marx's ideas that already exists in her family. However, her family, like many others, are communists only in the abstract. 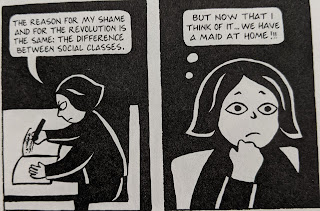 As we get back to the present, we learn that Satrapi has a royal lineage on her maternal side, with her grandfather being one the many last princes of the Qajar family. The Pahlavi dynasty is installed by means of a coup d'tat supported by the U.S.A. and the British government against a democratically elected leader. Why? Well, oil. As the revolution heats up and Satrapi's parents take an active role in the anti-regime protests, we see violence in the streets, and we witness incidents such as the Cinema Rex fire, which killed more than 400 people. Though the Satrapi family believe firmly that the Shah was responsible for this incident, there is no historical agreement on this fact. Ultimately, the Shah is exiled, and takes refuge in Egypt as the Western powers -- Jimmy Carter being at the stewardship of the U.S.A. -- lose interest in him.
However, the joy is short lived as Ayatollah Ruhollah Khomeini takes over the reins, and Islamic conservatism becomes mainstream. We also learn about a revolutionary streak on Satrapi's paternal side, as the new regime starts persecuting people, closing down universities, and implementing an Islamic constitution.

But that is not all. Iran soon get into a war with Saddam Hussein's Iraq, and we witness the impact of this war first hand, until Satrapi is sent to Austria for continuing her studies.
This is an eventful book, and Satrapi is forced to pack a bunch of information in an unusual format. Despite this, she keeps the tone light and does not lose focus on the wishes and desires of an adolescent girl. It is worth re-emphasizing that Marjane Satrapi has a terrific sense of humor, sometimes of the gallows kind. She attributes this to the Persian outlook of life shaped by generations living in a historically turbulent region. 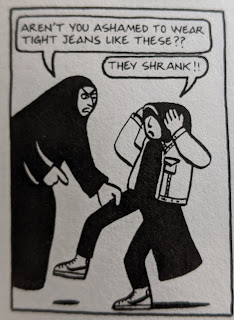 However, this lightness of tone was the first problem with Persepolis for me. This book is targeted primarily at adolescent readers as an introduction to the complexity, and also relatability (for people are the same everywhere), of life in Iran. Reading this as an adult, I feel a desire to know more about the events and incidents hinted by her. The second problem, if I may call it that, is the background of the Satrapi family, which admittedly only in some small ways, protects them from the most tragic aspects of war and revolution. This is not something that the author could control, and certainly not something that invalidates her experience of living in Iran. The solution to both these problems lie simply in me exploring more about Iran and the history of the middle east, and reading first hand accounts from many different perspectives.
Persepolis does not lack profundity, and my favorite fragment is this line uttered against nationalist fervor : 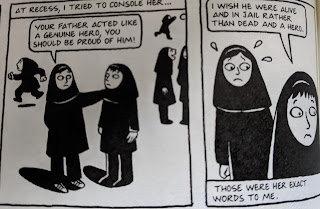