He said he was trying to write about impossible, obsessional love, father-son relationship, sibling quarrels, and yes, unforgivable things; about Indian immigrants, racism towards them, crooks among them; about cyber spies, science fictional and "real" realities, the death of the author, the end of the world.. incorporate elements of the periodic, and of satire and pastiche... And it's about opioid addiction, too.

- Rushdie in (and of?) Quichotte

I'm no critic, sir, but I estimate that you're telling the reader that the surreal, and even the absurd, now potentially offers the most accurate descriptors of real life. It's an interesting message, though parts of it requires considerable suspension of disbelief to grasp.

There are few things that I remind myself of before starting any of Salman Rushdie's books - that his writing is quirky, that he loves wordplay, and that he threads the very thin veil between craziness and brilliance often veering a little into either side. Ever since I learnt about his latest novel, Quichotte, set in present day U.S.A, I was waiting with anticipation. Having spent my last 4 years in the U.S.A, I can completely relate to his categorization of the current times, here and elsewhere, as the "Age of Anything-Can-Happen", where "a whole nation can jump off a cliff like swarming lemmings".

In his Postscript to The Name of the Rose, Umberto Eco writes that the "postmodern reply to the modern consists of recognizing that the past, since it cannot really be destroyed, because its destruction leads to silence, must be revisited; but with irony, not innocently", adding that postmodern texts are categorized by "Irony, metalinguistic play, enunciation squared". As far as I understand, meta-modernism is postmodernism infused with hope and sincerity, and if this understanding is correct, Quichotte is a meta-modern novel. It is loosely based on Don Quixote by Cervantes, a so-called picaresque novel consisting of various episodic narratives on a quest. 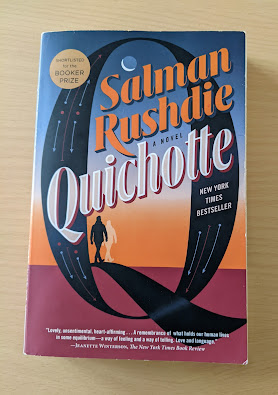 It is not easy to summarize Quichotte. It primarily seems to be about a "traveling man of Indian origins, advancing years, and retreating mental powers.. Incipiently unstable, unpredictably capricious, increasingly erratic, and mulishly obsessional cast of mind". However, it is also about a mildly successful author trying to write a career-defining novel, about a greedy pharmaceutical company owner who profits of the use of an injectable opioid substance. There are his victims, who have their own complexities in life, who feel that "(t)hese days the only way to experience joy was through chemistry. ", and hence play a willing role in their own destruction ("It's lithium and Haldol and Haldol and lithium. Can't do without it pals, doll, and so I just live withium"). There is a former Bollywood actress who has established herself in Hollywood as some sort of a mixture of Priyanka Chopra, Oprah Winfrey and Ellen DeGeneres. There is an imagined character, and a character imagined by this imagined character, and a talking cricket imagined by the latter. There is a former immigration lawyer who is on the verge of being "cancelled" despite having led a life dedicated to rights of the unrepresented ("To be a lawyer in a lawless time was like being a clown among the humorless: which was to say, either completely redundant or absolutely essential."). And there is a not-so-subtle parody of Elon Musk, in name and in persona : “Evel Cent, a bad stink. To some people that was what he was, an unpleasant self-promoting capitalist fart, but to others, mostly young others, he seemed like a kind of prophet, and here he was on television, doing a prophet’s work while also justifying the opinions of those who thought him a phony egotist skunk.”

If that is not rich enough, there are pop culture and literary references galore. The narrative structure is borrowed from Don Quixote, and there are repeated references to Pinocchio as well. There are references to Tennyson, Hans Christian Anderson, Moby Dick, The Death of a Salesman, Arthur C. Clarke, and more. Salman Rushdie's primary window into the American mindset seems to be through T.V. shows and movies, so there is a humungous list of pop culture references about every kind of show that's on American cable T.V., most of which I am not familiar with. This is another sense in which Quichotte is postmodern.

But Quichotte is not just an encyclopedia of books and stories to read, myths to know and T.V. Shows to watch (or skip). There are some very well developed characters spanning mid-20th century Bombay, the U.S. and the U.K. Rushdie seems to have made a conscious decision to portray every major character as an Indian immigrant. The core of the story consists of genuine issues such as child abuse, sibling rivalry, familial dynamics, and grievances that fester and manifest in complex ways and resonate across continents and time. There is also a New Jersey town whose people turn into mastodons, in a glaring metaphor for neighbors who turn unrecognizable thanks to conspiracy theories. Of course, the title itself demands a mention of Q-Anon, and we get it, almost as an afterthought.

On the flipside, Quichotte needs some patience to get through. The references and sometimes unnecessary facts that pepper the narrative hinder it. It is hard to keep track of what is imaginary and what is real in the frame of frame of frame narrative, but if you take a mental step back, you realize that it is the imagination of Rushdie that we glimpse into. Quichotte begins with a road trip across the U.S.A which sounds extremely exciting in theory. But the journey is largely flat, except for a couple of incidences of racism in mid-western U.S.A. Finally, this is a book about the literate, for the literate. "A good knowledge is the classics is the sign of an educated man" says one of the characters. But it seems off-putting at times to read a book where every character is well versed in literature, especially when the primary setting is a country and time where derision of literature and arts is on the rise.

I read Quichotte a few months ago and it was not a breezy read. Looking back now for writing this review, I have fonder memories of the book. Rushdie's observation on the present day U.S.A. is on the dot : "this is the way things are these days in America: that for some of us, the world stopped making sense. Anything can happen. Here can be there, then can be now, up can be down, truth can be lies. Everything is slip-sliding around and there's nothing to hold on to. The whole thing has come apart in seams. For some of us, who have started seeing the stuff the rest of us are too blind to see. Or too determined not to see." His solution to this is story tellers, and immigrants. And in making a case for immigrants, he also defends his complex and sprawling narrative.

An interjection, kind reader, if you'll allow one: it may be argued that stories should not sprawl in this way, that they should be grounded in one place or the other, put down roots in the other or the one and flower in that singular soil; yet so many of today's stories are and must be of this plural, sprawling kind, because a kind of nuclear fission has taken place in human lives and relations, families have been divided, millions upon millions of us have traveled to the four corners of the (admittedly spherical, and therefore cornerless) globe, whether by necessity or choice. Such broken families may be our best available lenses through which to view this broken world. And inside the broken families are broken people, broken by loss, poverty, maltreatment, failure, age, sickness, pain, and hatred, yet trying in spite of all to cling to hope and love, and these broken people--we, the broken people!--may be the best mirrors of our times, shining shards that reflect the truth, wherever we travel, wherever we land, whatever we remain. For we migrants have become like seed-spores, carried through the air, and lo, the breeze blows is where it will, until we lodge in an alien soil, where very often, we are made to feel unwelcome, no matter how beautiful the fruit hanging from the branches of the orchards of fruit trees that we grow into and become.

You will enjoy this book if his argument convinces you. I did.