"It  takes a certain kind of person to live in China now," Chen mused.

"What kind of person?", Mary asked.

“Someone who can see true meanings, someone who does not only want the world better but believes it can be made better, and gets angry because it's not done, someone who is not willing to hide himself in one of the few good places left in the world-someone who is tough!”

Pearl S.Buck was an American born and brought up in China. This gave her a window into two vastly different cultures. Though her credibility as a representative of Chinese culture to the English speaking world has been questioned, I believe her mixed background is perfect for a novel like Kinfolk, which begins in Manhattan and moves into hinterland China. Kinfolk follows the Liang family as they grapple with the problem of being immigrants in America and of being outsiders in China. 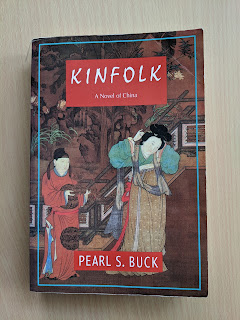 The novel is set in the middle to late 1940s with a tumultuous background (“we have finished with one age to begin another”). Post the Japanese invasion, China was in the final stages of Chiang Kai-Shek’s nationalist government before Mao’s declaration of the creation of the People's Republic of China in 1949. Dr. Liang is a Chinese intellectual settled in the U.S.A, writing for western readers. He has a firm belief in Confucian values and a stubborn moral center. But the China in his mind is the China of the past, and though he paints a rosy picture of his homeland, he realizes that he does not belong to the China of the present. “Surely men like myself represent more perfectly than peasants can the spirit of Chinese civilization. Our nation has always been ruled by our intellectuals”, he says at one point. Surely, not a view that would be appreciated by peasants in the midst of a revolution against their landowning feudal lords.

But Kinfolk’s primary focus is on Dr.Liang’s children - James, Mary, Peter and Lili. James and Mary feel a great desire to contribute to their home country. Peter and Lily, born in the U.S.A., are more Americanized. James, a skilled surgeon, takes up a job in his home land and, due to circumstances, is joined by his siblings. Kinfolk deals with their journey in trying to adapt to their home country, and getting accepted by their extended family. At the heart of the novel is a conflict between modernism and tradition, with Pearl S.Buck trying not to take a stand either way.

Personally, Kinfolk started off on a relatable note, thanks to the setting in Manhattan, especially the localities around Riverside Drive. Dr. Liang’s attempt to balance pride in his ancestry and shame on aspects that the Western World would consider despicable is also well portrayed : “Americans tend to think too little of us, and we should not therefore lend ourselves to their low opinion“, he says.

Kinfolk is structured in the mold of a classic, with well defined characters and fairly predictable character arcs. James is the character around whom the plot revolves, and he grapples to resolve the conflict between his scientific training as a surgeon and the traditional values of his ancestral relatives. Mary is his closest confidante, with a “honesty that will not be corrupted”. Her headstrongness clashes with the traditional patriarchy of her hometown. Peter is in an impressionable age, and has strong opinions. His initial reaction in China is “I don't like living in a country where everything is falling to pieces and all that is worth talking about is the past”. Lili is fully Americanized, and has the entitlement of an American. “Lili was so soft, she yielded everywhere -- until one knew she had really yielded nowhere.”

There are other interesting characters in the fray as well. Liu Chen is the most admirable among these. He gets to mouth lines such as “scholar, landlord, magistrate, warlord - there you have the tyrants of the people”, and probably reflects the views of the author the most. I couldn’t help but love Young Wong, whose outlook of life is simply surmised by “with my belly certain of fullness three times a day, I fear no god or man”. However, the best character in Kinfolk is undoubtedly Mrs. Liang. Her defining characterestic is, at least initially, just that “she never thought of herself”. But as Mary comes to realize, “her mother was not at all a stupid woman. It was true that hers was a brain which could neither receive nor retain an abstract idea, that is, an idea that has nothing to do with the simple welfare of those she loved. Heaven, God, Government, Communism, War, Human Rights, Religion, all the large words which provided modern arguement she tolerated as amusement only for men”.

But Kinfolk is not a perfect novel. It’s classical style makes the actions of some of the characters predictable. The 1940s is a tumultuous period in Chinese history, but the backdrop does not convincingly weave into the story. I expected to learn more about the upheavals in society, but Kinfolk’s focus is narrower. It seems as if the author does not want to take a political stance, and wants to take a centrist attitude in the tradition versus modernism debate. The conclusion is abrupt as well. Pearl S. Buck does attempt to anticipate this criticism with the concluding lines “what is the end of the story? There is no end. Life folds into life, and the river flows on”. It did not work for me.

What worked for me however is the portrayal of Mrs. Liang. She is portrayed as a “bridge between these centuries” (the 18th century of pastoral China and the 20th century of modern China). In fact her transition into one of the central characters in the eyes of Mary is what made this book work for me.