I have a link to my blog in my resume, which also smugly mentions "writing" as one of my hobbies. A recruiter took the effort to visit it and wrote a quick note to me about it ("Unfortunately we decided not to proceed with your application at this moment"), triggering memories of long, long ago. I took a quick look at the blog myself and realized that despite being constituted of one part silliness and remaining two parts pretentiousness, I can't believe that I wrote these posts. My writing abilities, like many of my other abilities, have diminished with age.

I know this because I have a draft post saved from last year simply titled "My 2019 in books", with a single image and a single word ("2019").  The last few years have widened my perspective of the world, narrowed the little self-confidence I had, and made me a model 21st century media consumer. I can not survive a few minutes without consuming some profoundly useless information online.  I do not have original thoughts. When I do, I do not have conviction. When I do, I realize in a couple of days that I am wrong.

I realize this is all driven, partly, by how little I read these days. Not for lack of wanting to. I have been buying a steady stream of books that I would love to read, sometime in the future. One day. Maybe next year. But I wanted to write something about what little I did read in 2020. 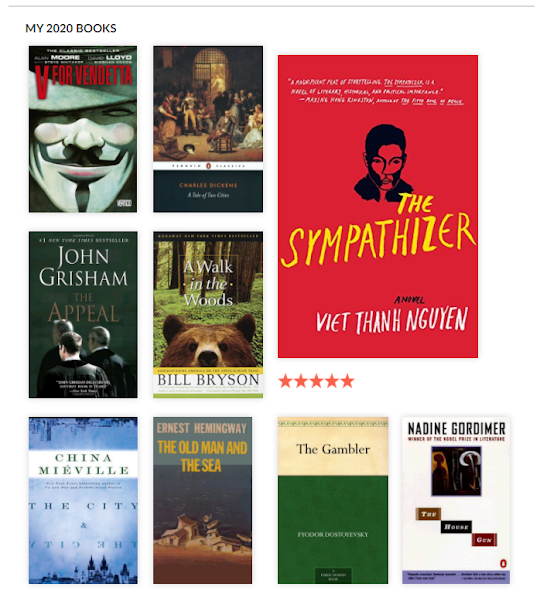 I started this year with V for Vendetta by Alan Moore. Back when the Wachowski siblings adapted  V for Vendetta for screen, I made it a point to watch it and was mesmerized by it. I was recommended the book many years back by a friend and never got to it. I finally managed to read it this year after wrestling through Umberto Eco's terrific Focault's Pendulum last year. Unfortunately, the graphic novel did not make as much an of impression on me as the movie did a few years back, primarily because the movie had been a mostly faithful adaptation. Also, Alan Moore's focus is more on the plot than the characters. Regardless, Alan Moore's seminal work is definitely recommended for its originality and vision.

The classic A Tale of Two Cities by Charles Dickens had always been on my wish-list. I had read the famous opening lines ("It was the best of times, it was the worst of times") and the first few pages a couple of times as a kid, but I finally managed to plough through them shamefully late in my life. Reading it now, the characters and their dialogue seem overly dramatic. However, Charles Dickens' mastery over plot construction and tying up loose ends is evident throughout. Dickens does a wonderful job of capturing the apathy of French aristocracy that leads to the violence, ugly in his eyes, of the French Revolution. Even though the twists and turns were predictable, this was still a fun read.

I then took a slight diversion into popular novels with John Grisham's The Appeal. When a Mississippi court rules against a chemical company for polluting a town's water supply with toxic waste, the company's shares take a dive. The company's owner appeals, and aims to install a Supreme Court judge who would rule in favor of corporations. The Appeal was written in 2008, but the politics of America is largely similar. John Grisham highlights the conservative machinery with churches, corporations, and multi-million dollar donors working in tandem to try and uproot a perceived (a perception they create) liberal female judge. There is even a Trump like wildcard character thrown in the mix. The only dated factor in Grisham's page turner is the fact that in today's world, the wildcard would be the protagonist.

My surprise pick and probably my best read this year was Viet Thanh Nguyen's The Sympathizer. I take pride in accidentally discovering books that make a significant impact on me. I have been living in the suburbs of Boston for a year and a half without realizing that I did not have to reside in Boston city to be a member of the Boston Public Library. As a quick side note, one thing people did not tell me about life in the US is that the libraries here are amazing. They are extremely welcoming places with a ton of resources, most of them free. Anyway, the Boston Public Library had a curated list of Pulitzer Prize winners which introduced me to Viet Than Nguyen, apart from making me aware of the fact that there is a Pulitzer Price category for fiction. His The Sympathizer cannot be fit into a single genre. It is part historical fiction, part Conrad-ish spy novel, and mostly a study of culture of three people - Vietnamese, American, and Vietnamese-American. Amazingly, the author's wit allows him to fit all these into 300 odd pages. The one downside is, again, the characterization, or the lack thereof, of women. If I, this blog, and the world survive 2021, I expect that my next edition of this post will contain Viet Thanh Nguyen's sequel to The Sympathizer - The Committed.

I love Bill Bryson, and his ability to explore a subject deeply and convey it to readers with wit and humor.  Having read a few of his travelogues before, I picked up his A Walk in the Woods: Rediscovering America on the Appalachian Trail this year. This time, Bill Bryson attempts, unsuccessfully, to hike the complete Appalachian Train, spanning more than 2000 miles from Georgia to Maine. His adventures simultaneously encourage and dissuade us from attempting a similar exercise. But I do wish to visit parts of the trail in Massachusetts, New Hampshire, and Maine one of these days. Bill Bryson does seem a bit uncharacteristically mean and cruel in this work while describing the people he encounters in this hike. From my own experience, I am guessing it is age. For some reason, as I get older, other people are turning into senseless morons.

Another accidental discovery through a recommendation from Boston Public Library was China Meivelle's The City and the City, winner of the Hugo Awards for 2010. Belonging to a genre called Weird Fiction, Meivelle's work imagines two cities that are located in the same geographical place, but which are separated by culture, and strictly imposed ability of people to "unsee" the other city if they lay eyes on "foreign" people, buildings and streets. Conceptually this was difficult to wrap my head around. But so would borders be to a tribal people. Once you accept Meivelle's strange setting, the plot is a reasonably regular investigative thriller. I wouldn't call The City and the City an extraordinarily good novel. But it makes you think, introduces you to a world of possibilities, and allows you to reflect on your own world. That's good enough for me. I would definitely explore more of China Meivelle's works.

I grabbed another classic, The Old Man and The Sea by Ernest Hemingway next primarily because of how short the book his (a little more than 100 pages). This is a simple, but gripping tale of grit and determination. I couldn't relate to the setting and milieu surrounding a fisherman in a Cuban coast. But that didn't stop me from enjoying this quick read.

I then tried my hand with Fyodor Dostoyevsky's's The Gambler. I had loved Crime and Punishment when I had read it ages back. The Gambler is primarily focused on addiction, something I can relate to thanks to my own addiction to consuming content. This is a fairly short work written when the author himself was recovering from a bout of addiction, and the characterization is not as sharp as in Crime and Punishment. However, there are still moments I loved. There is always something to learn from the work of a master.

I ended this year with Nadine Gordimer The House Gun. There was a book sale at my local public library where I was allowed to grab a huge bagful of books for a measly $5. I picked a few books solely because the covers indicated that the authors were Nobel Prize winners. In this work, Nadine Gordimer introduces us to post-apartheid South Africa, where violence is widespread and guns are commonplace. An upper middle class couple's lives are upturned when their son confesses to a crime of passion. Nadine Gordimer takes us through their personal struggle, while setting up a macro view of political, social, and legal changes in the country. While I enjoyed the macro view, I couldn't sympathize completely with the lead characters. Gordimer conveniently uses their professions as a stand-in for their personality. As a software engineer who rarely makes logical decisions, I found myself personally attacked. This was still an eye-opening read that gave me a lot to think about.

I have mentioned earlier in this blog that I strongly feel there is a right time to read certain books. Here is something that reinforced that belief in me. The House Gun was published in 1999. The novel depicts a South African court that is built replacing a former quarantine center, leading to to this exchange between a couple of characters.

Where do people with infectious disease go now?

Very slowly, she smiled, for him. Most of those epidemics don't exist any more. So no more Fever Hospital. People are inoculated as children. What we have to worry about medically is only communicated intimately, as you know; so it wouldn't be right to isolate the carriers from ordinary contacts, moving about among us.

Reading this in 2020, I couldn't suppress the thought that Nadine Gordimer might have won a Nobel Prize in Literature. But she is not winning one for clairvoyance.

PS : I promised myself that if I finish this post, I will include the image referred to earlier from "My 2019 in books". So, here we go. 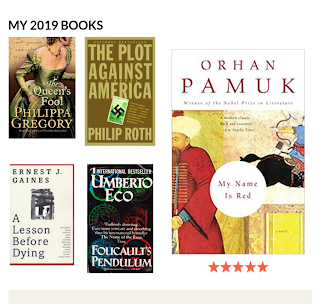