I am here to make a confession. I am twenty-seven years old, and I haven't learnt to comb my hair. To those who have seen me for any length of time, this would not be an earth-shattering revelation. However if you were, by any chance, attributing my hairstyle to the fact that I am too cool to care (which I am not), here you have it from the horse's mouth. I do not know how to comb my hair. Worse, I can not differentiate a good hair-style from a bad one.

Once every month, I get my hair cut so short that combing isn't necessary. It then grows damn fast as I struggle to tame it. After a point I give up, and get it cut again. I am just back from my monthly haircut, this time from one of the posh, professional, air-conditioned parlours which have a receptionist, pay their taxes and force us to do the same, and have English magazines to entertain us - magazines filled with photos of unsmiling male and female models. "Is this what handsome is like?", I ask myself looking at the pictures. "Is THAT a good hairstyle?".  I can't help but get reminded that things are changing too fast. It was different when I was a kid.

As a schoolboy, getting a haircut was a Saturday chore. With three males in the house, my dad would strictly tell us that the three of us should not get our hairs cut on the same day. That would indicate an inauspicious occasion. We would do a cursory visual examination to decide whose haircut can't wait, and split up the Saturdays accordingly. Barber shops were a sort of cultural centers, akin to the cafes and bars of 19th century where great thinkers discussed revolutionary ideas and creativity was born. I would head to the nearest barber, tell him one word -- "short" -- and slip into my own World. The conversations from around me would occasionally penetrate my reverie. "Karunanidhi is a scheming old man", "Jayalalitha is a cruel dictator", "When MGR was alive..". There would be a TV or radio playing melodious songs, and I would drift into a quick and relaxing nap, until the barber wakes me up with an "enough?" After a clueless inspection of the mirror, I would nod approvingly, handover a hundred rupee note, collect the change, and walk home taking care not to meet anyone's eye. Haircuts were a personal thing to me, and I was not too eager to advertise mine to the World.

Once, my mom embarrassed me by barging into an all-male barber shop and threatening the barber to make my hair stylish and modern. "That mushroom thingy, or whatever. Do that. Anything but the bloody short-crop-crap". The barber advised me to come back after the growing the hair some more, and I found another barber to cut my hair short. Another time, a barber asked me if he can use a machine. I gave vague consent without having any idea what he was talking about. When he was done, he had given me the worst haircut ever in a life filled with bad haircuts.

My hair-style, or the lack of it, did not go unnoticed at school. "It looks like you have a helmet on your head", remarked a classmate, who started calling me "helmet". "helmet-ey!", he would shout from across the yard, making girls snigger at me in chorus. I assure you, I do not have any dark powers. But one day, during our PT period, this guy ran straight into a field where a shot-put tournament was being held, and a shot-put ball thrown by a powerful girl landed straight on his head. Eyewitnesses assured us that his head had split open. He was rushed to a hospital, his parents were summoned. Students were whispering that the boy wouldn't survive. As I was rushing towards my class a couple of weeks later, I heard someone yell "helmet-ey!" I turned up to look at a fully plastered face, and retorted with a "shotput-ey!" Rude. Cruel. But effective.

However, as I grew up, India grew with me. Middle class households started becoming rich. Corporates started paying people more. Autos were replaced with occasional taxis. Shopping became a thing. The new India was confident, and had an opinion on everything. They knew what they wanted, and how they wanted it done. The new India knew choice, and exercised it at every opportunity. The impact on barbershops was that barbers suddenly started asking too many questions. Somewhere around this time, I realized that my eyes were myopic (there are anecdotes about this too, reserved for another day), and started wearing a spectacles. The first thing I would do before sitting on the barber's chair was to remove the spectacles and place it on a slab. "Short, or medium?", the barber would ask. "short, but not too short". "How short?" "Short, but not too short". "Straight or round". "Dude! You decide on what you think looks good.". At this point, I would realize that there are two kinds of barbers in this World. The first would sigh, do nothing to hide the fact that they considered me to be an useless idiot, and cut my hair with visible disinterest. The worst of this kind would ask me more questions, and secretly laugh as I made a mess of my own hairstyle with my ignorant answers . The other kind, however, suddenly reveal themselves as creatures of brotherly affection. They invest themselves in making my hair look good, and proudly beam at me once their work is done. These kind of barbers are my soulmates. I have often given serious thought to marrying one of them, and carrying them around with me for my monthly haircuts.

A few years back, I wanted to write about a very small Tamil movie made by a debutante director. Two things struck me about the movie - the liveliness of the colours that were on display, and the fact that the saddest scene in this movie about a roadside romeo who is spurred by about half-a-dozen girls is when he comes out of a barbershop with a bad haircut. The hero is devastated, cries and wails, and covers his head with a cap on his next day to college to hide his hairstyle. There is not much point in writing about Attakathi now, as director Pa.Ranjith is now into the big league and too many people have written about his movies. However, I feel that barbers and the act of getting a haircut have not got enough coverage in literature and movies. Of course, Harry Potter has a famously unruly hair. Many a days I have petted my own hair affectionately as I waited for a letter of admission from the Hogwarts School of Witchcraft and Wizardry. It was a rude shock to learn that I will have to suffer my hair in the real World, and not a magical one. 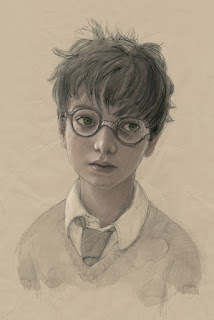 A few gray hairs are starting to grow on my head these days, and my hair falls at such a rate that I wonder if the rate of fall would exceed the rate of growth soon. Not much has changed in my own expectations out of a haircut though. However, what we have today is a chain of corporate barber shops, or "unisex salons". Expensive, and not worth the money for the short-crop I need. The smaller shops owned by individuals are still around, but they are fighting desperately to hold on and the result is increased price everywhere. My haircut last month was done by one such small time barber, and I had to get it done prematurely. This is a shop my brother frequents, probably as the only customer. After getting a haircut, my brother offered a hundred rupee note to the barber, only to be told that the barbed did not have change. In fact, this barber did not have any money at all. My brother told me that the barber had offered to do another haircut for someone in the family, and so off I went the next day. The barber was sprawled on the floor, taking a nap, and woke up hurriedly to greet his first, and by all signs the only, customer of the day. The water supply lines had been cut off, and there was no power. The bills were not paid. There were people outside shouting at him to return the money he had borrowed. The only good out of all this is that the barber asked me zero questions on how I wanted my hair cut.

The most irritating thing about the salons, on the other hand, is the confident and assertive guy sitting at the next chair. I saw such a guy today. "This part should be short", he indicated with his hands. "It should be thin here, and thick here". "And this", he concluded, "must go like this", waving his hands around. Throughout the haircut, this guy was offering backseat instructions to the barber. Every time such a thing happens, I am reminded of the legendary actor Vadivel ordering a Uthappam at a hotel. You must definitely watch the scene if you haven't. Even if you don't understand Tamil. Meanwhile, I tried indicating to my own barber that I fare very badly at any sort of questions, but the hints were ignored. "Is this enough", he asked me after a while. I peered at the mirror with my myopic eyes, realized that I couldn't see clearly without my glasses which were safely afar on a slab, pretended to critically inspect his handiwork, and finally nodded as if I was satisfied.


Few hours later, I am still not sure if my hair looks passably good now. The thing I hate most about the modern World is the amount of choice at our hands. In IT parlance, I expect a barber to be a domain expert, knowing what hairstyle would me suit me best. And what would suit me best is something that is neither too shabby not too attractive. Basically, something that is not noticeable at all. What would suit me is less choice on things I don't care much about.

Email ThisBlogThis!Share to TwitterShare to FacebookShare to Pinterest
Labels: Personal