A friend's mom passed away last week. She was crossing a road when a speeding two-wheeler hit her. The driver had an excuse for himself - he said "I was in a hurry to get to office". Are emotions singular? Can one be simultaneously happy and sad? Can you be simultaneously sad about two distinct things? Can one have separate strands of sadness like coiled snakes which wrap over each other, coming together at points, but still being independent?

If personal experiences are anything to go by, one can. I did. And one of these snakes pondered on "hurry". The Gods know how often I have been in a hurry to reach office. I could have easily been this guy. So could many of you. If my own perception of how thing around me are changing is a valid benchmark, people are, like I am, becoming more and more impatient. Horns, which were made to warn other drivers of someone's presence, are becoming obnoxious tools in the hands of agitated idiots. Some drivers imagine themselves to be Moses, separating out a sea of vehicles to create a path using only their horns.

Something about the modern lifestyle makes us to be in such a state. Everything needs to be productive. Every mundane activity deserves a non-mundane adjective to describe it. Travel needs to be enriching. Birthdays need to be explosive (everyone has a blast). Books need to be educative. Weekends need to be fun. Naps need to be rejuvenating. Blogs, except this one, need to be informative.  Weddings need to be grand. Schools and colleges need to make "industry-ready" individuals. Faces need to be photo worthy. People need to be happy and demonstrative of their happiness. Every minute, every second, every single fraction of a second, needs to be useful.

A lot of impatience we seem to have acquired follows from the free market structure. I can definitely feel this in a country like India, where people have just started getting used to luxuries a few other nations take for granted. After all, why sweat on our way to work when folks from Western countries have been travelling comfortably in cars for decades?  However, with our population, the ambitions of every one of us to get rich put together will turn out to be destructive. Would Ola and Uber drivers drive so damn rashly if they were not incentivized for completing more trips at a faster rate?  As corporates try to squeeze in as much as they can from their employees, work has become the central focus for many of us. We don't mind that we are ignoring people close to us. We don't mind knocking out a couple of people on our way to work. After all, work is worship. 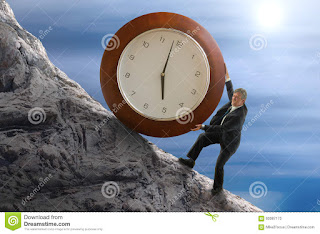 With all the progress we have had, we only seem to have more to do. The greatest outcome of modern civilization is that we have advanced tools that make it easier to roll up Sysiphus's boulder at a great speed. However, the boulder still rolls back down. Every single time. I wonder at the purpose of it all. I wish we could drive slowly. In road, and in life.