The Illicit Happiness of Other People by Manu Joseph - Review

‘If one half of your life has been tough’, she will tell Thoma another time, ‘the chances are that the other half will turn out all right. As Unni told me once, “In this world, you cannot escape happiness”'

The Illicit Happiness of Other People is Manu Joseph's second novel, published in early 2013. Set in late 1980s Madras, it is a darkly humorous tragi-comedy about a dysfunctional Malayali family. Manu Jospeh's Madras is a bleak place where "Men are managers, mothers are housewives. All bras are white. Anglo-Indian girls who walk in floral frocks are Maria". It "is (also) full of clone actors, full of acts and moments that people have plagiarized from films". It is this conservative city where all students aim to get into IITs, and any deviation from normalcy is sneered at with unspoken words that serves as a background for the Manu Jospeh's tale where hidden quirkiness in people break out of their suppression with doubled energy.

Oesep Chacko is the father in the Chacko family. An alcoholic, once-famous novelist whose rising fame is stopped by his ambition and the politics of a corrupt country, Oesep Chacko waddles in self-pity and gives up all intentions to provide for his family. Uncharacteristically for a journalist, he "is a man who wants to be inconspicuous, who suffers when eyes are on him. But then the fate of shy people is that all their fears come true".  Like Mermeladov from Crime and Punishment, his awareness of his uselessness (and harmfulness?) to his family does not urge him to do anything about it. "Don’t hate me son. There are people in this world who set out to make an omellete but end up with scrambled eggs. I am just one of them", he explains. Three years after giving up on seeking a meaning to explain his son's inexplicable death, a package addressed to him wakes him up, partially, from his slumber. The Illicit Happiness of Other People is at its core an investigative novel, with a journalist seeking reasons for his son's death. But does his investigation have an answer? After all, "that a mystery must have a resolution is obviously not a requirement of nature. It is, in fact, another deceit of writers. A plot device, like the idea of a beginning, a middle and an end."

Mariamma Chacko is his wife, who secretly hopes that she wakes up one day to find her husband dead. She imagines plots to murder him without violence, not too hopeful of them because "he is made of red earth and Malabar air". She puts behind adolescent horrors to become fairly successful with a Ph.D in Economics, only to get married to Chacko and to end up as a house-wife struggling to make ends meet. One of her sons describes her as "very smart, but a bit nutty".  The sole bright spot in her life, Unni Chacko, is plucked away from her, leaving her careless to the needs of her second son -- Thomas. The tragedies of fate are too much for her, but she fights on, despite being a schizoprenic lunatic who talks to walls. "All my Gold bangles, they have become your shit, haven’t they?", she asks her younger son. 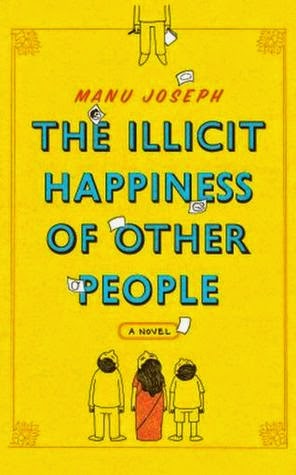 Thomas Chacko is the one character who really deserves our pity. Thoma is a Mayflower, in his own words, "I was this little boy whom nobody noticed. I was invisible."  A loser by the standards of the normal World, Thomas is eternally over-shadowed by his more charismatic brother, even after his brother's death. "Unni had no Expectations from Life. So Unni had no reasons to be afraid. Thoma wants so many things from the world, from people. That is why he is afraid, and that is why he is petty".  With both his parents immersed in their own tragedies, Thomas has no one to turn to. Introverted, awkward, mediocore in everything he does, each day is a struggle for Thoma. There is an hilarious sequence where Thomas tries to impress a girl with the only two facts he has ever managed to learn (What does KGB stands for? What is Pele's real name?). In another poignant moment, his brother good-heartedly pranks him into believing that "the home minister, who is responsible for happy homes, would soon pass a law changing the value of pi from 3.14159 to just 3, making it easier for all Indian children to calculate the area of a circle". Thoma is whom we root for, desperately hoping that things would turn out all right for the guy who, even for stepping out of his house, has to motivate himself with the mantra "Fight, Thoma, put fight" (a mantra that I myself use often these days).

Unni Chacko is like the hole in a donut -- he is not even there, but the whole fuss is about him. The revelation of Unni Chacko's character through the perspectives of people around him and their reminisces make a legend out of him. Unni was a "seventeen-year-old cartoonist, an exceptional cartoonist, but too young to accept that subtlety is not always a mask of mediocrity". And to dvelve into the character, Manu Jospeh shows us glimpses of the themes of Unni's cartoons. The themes leave us in no-doubt about the brilliance of the young artist. We also discover that Unni had no discernible reason to end his life. He was much loved by everyone, he was a star, and people around him looked up to him. He was cute, and girls adored him. He seemed like the happiest person in the Chacko family, in their colony, and beyond. His death causes sadness in most, and relief in some (for it is "the tragic defeat of the unusual, and so the triumph of the normal"). But it shocks everyone. Through Oesop's digging, we realize the other facets of Unni's character, and we discover that things were not as simple as they seemed on the surface. We also get to discover his multiple theories, on good and evil, on delusions, on happiness and other philosophical questions. Alas, "adolescence is a dangerous period in the lives of philosophically oriented males".

Almost all adults in Illicit Happiness of Other People are quirky (with the possible exception of one Dr. Iyengar). It is adolescents that the story focuses on, and we have various adolescents trying to handle the unfair burden of hope and responsibility placed on them. We have "Sai, the error in nature’s trial and error". Sai is Manu Joseph's caricature of a Tamil Brahmin boy -- selfish, hypocritical, ambitious, but shallow. "I am done with all this. I am an ordinary person, I want ordinary things. I don’t want to know the truth. I don’t want to see beauty. I am just another boy in Madras who wants to escape to America", he declares in a moment of self-acceptance. There is the brainy Balki, who provides a much needed turn-around in Chacko's investigation. "He was the star, I was just the brilliant guy", he declares comparing himself with Unni. He also gives Manu Jospeh the opportunity to bring in one of his most important thoughts : "It is the misanthrope alone who has clarity. By standing outside the huddle of men, he sees a lot, and what he often sees is the evidence that people are not as smart as dogs think they are. In the fog of ambiguities and mysteries, he desperately searches for truths because truth usually shows humanity in a poor light". And there is the all important Mythilli Balasubramanium, a neighborhood girl  who grew up adoring Unni and being adored by Thoma.

Manu Jospeh has a lot of acerbic observations to make about everything. I was initially put off with his relentlessly negative portrayal of Madras until I realized that this guy is relentlessly negative about most things. And then, I started enjoying it much more. Like Oscar Wilde, he throws up aphorisms which sound attractive but are not necessarily true. On men, he says : "Those old men who are so starved for flesh that they fondle children, fondle fully grown men, furtively flap their thighs when they watch women’s tennis on TV". On male friendships, he has these : "that any two men in the world have real affection between them is itself a myth, chiefly of the two men" and "the contempt of a male for a smarter friend". He does not spare the other side consisting of rationalists and atheists too : "proud self-congratulatory way of young atheists" and "rationalists think all god-men are frauds. That is the problem with rationalists. They are not rational enough." He has this on social workers "some of them, our living saints, do not realize that they are actually sadists who enjoy watching human misery from very close". And this on socialists : "All this will go one day, the animal poverty, it will vanish. And future generations will not know, will not even guess, the true nature of poverty, which is the longest heritage of man. Shouldn’t this be preserved somehow, like old colonial buildings, shouldn’t abject poverty be preserved as historical evidence? That is what socialists are trying to do in this country. Everybody misunderstands their intentions. They are noble conservationists, working hard to preserve a way of the World."

There are a gazillion of important minor characters - a strict aglo-Indian teacher, cartoonists named Alpha and Beta, a walking corpse, a psychologist, a moustached man from a cartoon and a cruel mother-in-law. As Chacko keeps meeting people, he discovers a lot about his son. "No matter what their delusions are, parents do not really know their children." The legend of Unni is so built that the mystery becomes almost unfathomable, and a bit of super-natural is thrown in.  As a result, the logical solution seems a bit forced, brought in through a deus ex machina. But you realize that there are not many other ways the plot could have been resolved, and you cut some slack for the writing prowess of Manu Joseph. And there are important take-aways from this forced-ending too.

The Illicit Happiness of Other people has had a profound impact on me. I would definitely recommend it. It is wonderful to see so many outstanding books by Indian authors, set in places you can relate with and with characters you have met. In my list, Manu Jospeh is in as much regard as Salman Rushdie, Arundathi Roy and Arvind Adiga. Before I leave you, here is the plot description of Enlightenment - one of Unni's numerous cartoons. I really wish someone made these into real comics.

In Enlightenment, a sage in robes is meditating; he is sitting on a high snowy peak. Seasons change, storms pass, but nothing bothers him. He gets a massive erection, which subsides in time, but the man is undisturbed, unaware of what is happening to him and around him. Mountain climbers arrive with their national flags and leave disappointed when they find someone already on the summit. The sage becomes very old, his beard turns white. Finally, he becomes radiant. A halo appears behind him. He has achieved enlightenment. He opens his eyes looking totally stunned. He screams, 'Shit, I am a cartoon.'