Meet my brother Sri Vittal, or Arbind as we call him at home. My brother often makes me feel old. When he has views, he usually voices them without wondering if he is being polite. He also provides hilarious entertainment to us all at home : sometimes deliberately, but often accidentally. When on a random day he started writing a story, we were all taken aback. This tiny little story was about a scientist who invents an unreliable time machine. Since I didn't admit that I liked it, he had to go online hunting for people who would "publish" it. I was astonished when he came back to me with a literary agent from UK who called him over phone to fix a deal. But then, we worked out that this literary agent was a potential fraud looking for some easy money. Recently, when I mentioned to him about my idea of publishing a collection of short stories with a few friends (more on this later), his immediate response was a haughty : "You want to get introduced to my literary agent"?.

He had more surprise for us in store as he started a blog soon. Though he hasn't written much, I loved how this post called "A theory that's so catastrophic" started with craziness and ended with unexpected profundity. Since he is good at dishing out things he doesn't like, I asked him to dish out a movie he hated. He almost didn't get ideas, until he happened to see Anjaan.

When Lingusamy was interviewed, he promised us Anjaan would not be another disappointment from him as he had put all his efforts and newly learnt direction techniques. So did it work? 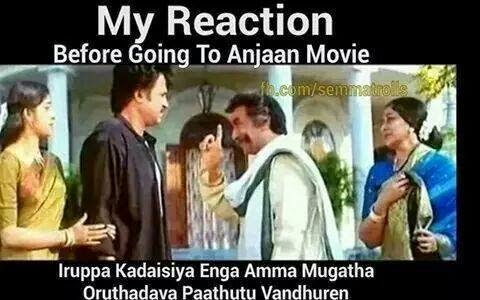 Hell yeah.. Here's a great film that 5 years kids MIGHT enjoy. This film is all about grown-ups pretending to be grown-ups. Haa! I remember those days when I pretended to be a cop and arrested my friends. I even had some cool Nerf guns to shoot my rowdy friends. Bang bang!! (Still a better bang than Anjaan). That's what happens here. And in Anjaan, it's Surya who pretends to be a don controlling Mumbai. And how does he become so powerful? Well he doesn't. He just pretends. Oops. SPOILER.

You might have watched Toy Story, Lego Movie or Little Toy Soldier. But Anjaan is the adult version of such movies.

Surya : Dei I bill be polish da. Bleas.
Commissioner : No No I bil be polish. You be Rajju Bhai.
Surya : Boy ah? I am already boy only da.
Vidyut : Dei adhu bhai da. Ok then I will be Chandru Boy. Let's start playing da. Mummy gave permission for 2 and a half hours only da.
Lingusamy : Annnnnd action. 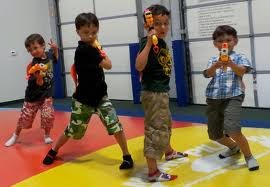 So it's a don movie and a powerful don is controlling the place. Shouldn't there be someone who betrays his trust and kills the one who's close to the don? It happens. And who's close to Surya? Again you guessed correctly. Vidyut Jamwal, the same person who got shot by Ajith in Billa 2, got punched to death by Thuppaki Vijay, has made it here only to show that strong men do cry. Awww. Such a cry baby. Should not have come here.  And who's the villain who pulls the trigger? Apparently Manoj Bajpai needed a break from all those serious roles. "Time to get crazy Manoj.  Just pretend that you are a notorious don, kiddo! Attaboy! Yay it worked", says director to the villain.

"Time to bust those punks", says Surya who's back from death. Now Surya goes in disguise to avenge his friend's death and then the distributors and producer lived happily ever after (sort of!).

But this film had a deep meaning : it's never too late to be a kid once again. Every scene in this movie was so relatable in my life. There's a scene where Surya and Vidyut goes to a party and a villain says "I will slaughter you like pigs." A very hurt Vidyut keeps repeating the line again and again. After a while he tells to Surya, "Thukanu da avana. Ni edho panirupiye? Thukitala? Thukitala? (We have to teach that bully a lesson. What? You already did?)." Surya smiles indicating he did. Similar thing happened to me once. Me and my friend, 7 years ago, went to another dude's house. This dude had a 'Snake Eyes' action figure/Bhommai. And this rich dude told my friend, "where's your G.I.Joe toy da?". Somewhat hurt by this statement my friend said to me, "Thukanum da avan Snake eyes ah (We've to steal his toy)." But unlike Surya I didn't teach that rich kid a lesson. Such a memorable childhood. If not for Anjaan, the memories would have gone to the 'Junk Folder' like the movie file in my system.

The movie also shows how valuable friendship is. Because when Surya pretends to be a Don, his friends play along. Such a wonderful friendship.