"Like most misery, it started with apparent happiness"
- Markus Zusak, through "Death" in The Book Thief

Does this review contain spoilers? I honestly don't think so. On that note though, here is a quote from The Book Thief

Of course, I’m being rude. I’m spoiling the ending, not only of the entire book, but of this particular piece of it. I have give you two events in advance, because I don’t have much interest in building mystery. Mystery bores me. It chores me. I know what happens and so do you. It’s the machinations that wheel us there that aggravate, perplex, interest, and astound me.

The Book Thief by Markus Zusak is a fairly modern novel, but it is yet another story set during World War 2 Germany. The Book Thief reminds me -- due to my own ability/snag of relating completely unrelated things -- a lot of Odd Thomas by Dean Koontz; another profound book. Both The Book Thief and Odd Thomas are stories set in the backdrop of immense tragedies, and told with an unexpected sense of humour. The narrators in both the stories seem to be attempting to gloss over the tragic parts by narrating the events with a detachment. The tragedy is so pronounced in both the stories that it still manages to creep in, with far more impact than it would have otherwise. Odd Thomas is mostly about the struggles of one person in dealing with his tragedies, whereas The Book Thief is about the tragedy of a country, or even humanity as a whole. 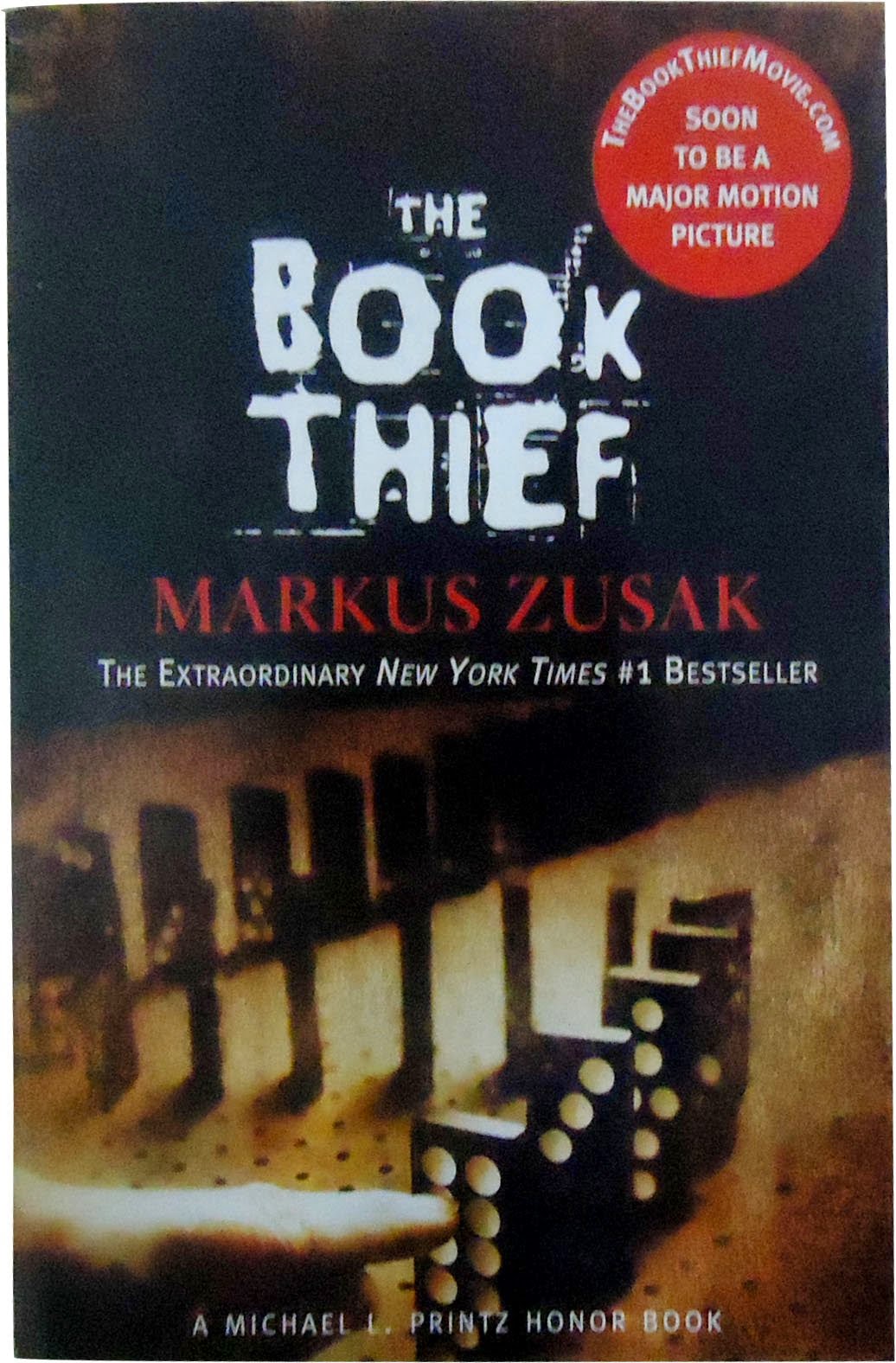 Markus Zusak wastes no time in capturing the reader's attention. He does this by using the unlikeliest of narrators -- death. The very idea keeps you engaged throughout. It is interesting to think of death to be as fascinated about humans as we are about death. The narrative style is extremely bold and unorthodox. There are fore-warnings and there are sometimes-diverting asides that highlight key points (as if you are reading a technical manual). To tell a story, and to tell it well, with such an unconventional style requires an excellent command over vocabulary, and Markus Zusak pulls it off brilliantly.

The Book Thief is Liesel, a young girl beset on all sides by tragedy. She is a survivor, "an expert at being left behind". Circumstances take her to a town called Molching (apparently, it translates from German to heaven), where she lives with foster parents. The Book Thief is the testament to the power of books, the power of words, to take us through immense tragedies. The Book Thief is also about the good that remains in people, and manifests itself in the most unlikeliest of circumstances. It is about humanity, which is made up of "so much good, so much evil". It is about a girl who learns to read, to write, and to get through great loss.

For a book attempting to deal with such a vast subject, it has very few characters. There is Hans Hubberman , Liesel's foster father, who is

..barely visible. An-un-special person. Certainly, his painting skills were excellent. His musical ability was better than average. Somehow, though, and I’m sure you've met people like this, he was able to appear as merely part of the background, even if he was standing in front of a line. He was always just there. Not noticeable. Not important or particularly valuable.

Hans Hubberman manages to win hearts though, and he does it through "the brute strength of the man’s gentleness, his thereness". There is his wife Rosa who possesses "the unique ability to aggravate almost anyone she ever met" , but is still a "good woman for a crisis". There is the endearing Rudy Steiner, Liesel's partner-in-arms and best friend, who does not hesitate to exercise his "God-given right to stupidity". There is Max -- someone who is forced to live a life filled with guilt and shame for no fault of his own. And there is Ilsa Herman, who "had decided to make suffering her triumph. When it refused to let go of her, she succumbed to it. She embraced it". Add to this a few "cameo appearances" from other minor characters, and you have the town of Molching. Each of these characters is extremely well etched out, though Zusak seems to shower special attention on Hans and Rudy. Apart from Liesel, that is.

The Book Thief leaves you in no doubt about the writing prowess of Markus Zusak. He extensively uses the technique of Anthromorphism. Take this for example


Oh, how the clouds stumbled in and assembled stupidly in the sky. Great obese clouds. Dark and plump. Bumping into each other. Apologizing. Moving on and finding room.

And Zusak does not moralize. It helps a lot that the narrator is impersonal -- can anything be more impersonal than death? There are general observations that creep in though, remarks made in the passing, such as "I guess humans like to watch little destructions. Sand castles, houses of cards, that’s where they begin. Their great skill is their capacity to escalate.", and more trivially, "No one’s urine smells as good as your own". These are completely non-judgmental though, and the tone is strictly that of wonder and incomprehension at the extremes of human behavior.

The flip sides I had with the book are probably out of my own doing. I had to squeeze in time to read the book, and barely managed to hurry through a few pages each day. It took me a month to finish it (despite the fact it is seldom dull) . But I did feel that the book didn't really live up to the expectations I had of it. I didn't get the broader point of the whole novel. And when a writer reveals the end prematurely, "the machinations that wheel us there" must carry the whole burden of the plot. The Book Thief falters a little in that regard, like another highly acclaimed work -- The White Tiger by Arvind Adiga. Despite all these probable faults, which might not be faults at all if I had read the book as I ought to have, the writing keeps you very engaged, and there are characters worth loving and recalling (Rosa and Hans are my favorites). I would recommend this read without any hesitation.

And regarding Markus Zusak, I am looking forward to read more by him, and would be starting as soon as I can with his other books. We have a potentially great modern author, and we better keep a close eye on him.