Two MPs and an Aam Aadmi - A Political tale

The IPL is finally over. Just before the final match between CSK and MI began yesterday, twitter (atleast, my timeline) went berserk. Here is a glimpse of what the CSK fans were saying about Gurunath Meiyappan's (CSK Team Principal enthusiast) arrest. Two recurring themes in many tweets were about the anti-south hatred of the north Indians, and how the Lalit Modis and the Sharad Pawars are not to fit to accuse N.Srinivasan, simply because they themselves are alleged to be corrupt. I chose to ignore the first one. Thinking about the second theme made me - as it often does when the mind is idle - wonder about certain things. Should we worry only about the accusations made by the incorruptible? Should we be more concerned about who is saying it that what is being said? As my mind wandered on, I inexplicably ended up thinking about the state of politics in India. I was reminded of a famous and much-retold Indian folk story. Here is my highly altered version of the story, which I believe sums up the situation elegantly.

A middle class aam aadmi is walking through a jungle, using Google maps in his smartphone to find his way out, when he hears some commotion. He looks around, and finds a ruling party monkey and an opposition party monkey quarreling with each other vehemently. He immediately intervenes, and asks what the whole argument was about. The opposition party monkey says "He must resign! He has just been linked to a 300 crore scam, and  the country demands that he must resign".  The ruling party monkey lets out a laugh and replies "Lol! Look who is talking. Their party was voted out of the last elections because he was involved in a 1,000 crore scam!".

The Aam Aadmi looks perplexed, thinks deeply for a moment, turns towards both the monkeys and says "Gentlemen, we have a serious problem here. When both of you are unequally corrupt, how can I be expected to judge your merits and demerits objectively?". The ruling party monkey says, "Sir, I have an idea. Let me rule for sometime, and once I somehow find a way to gain 700 crores more, we will both be equal. You can judge both of us properly, and let the best monkey rule." The Aam Aadmi excitedly drowns out the objections of the opposition party monkey, exclaims "Great, please go ahead. Please ping me when you have amassed Rs 700 crores more", and turns around. Not being someone prone to waste time, the Aam Aadmi busies himself in important matters such as checking out his tweets, uploading photos in Facebook, and forming detailed reviews of a recently released movie (which in his opinion was 'a complete waste of 120 bucks' ). After a few minutes, a temporary reduction in data speed makes him turn around, reminding him where he is. He looks at the ruling party monkey and asks if he is done. "Almost sir! I have amassed 950 crores", replies the ruling party monkey. "What!", exclaims the Aam Aadmi, "I specifically told you to stop at 700 crores. You corrupt idiot! What shall I do now?" 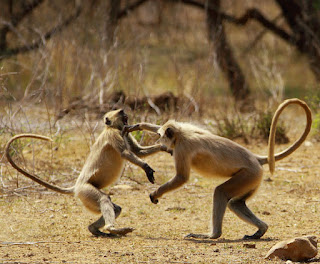 "Esteemed sir", interjects the opposition party monkey, "I have a suggestion - why don't you let me rule until I amass an amount of 250 crores, and then you can judge us equally?". "Wonderful idea!", exclaims the Aam Aadmi, "please go ahead. But don't forget to stop at 250 crores and inform me".  Not being someone prone to waste time,the Aam Aadmi busies himself in important matters such as trolling the IPL teams of all other states, collecting information on the link-up between the blockbuster hero and the newbie heroine, and writing never-to-be-read blogposts (such as this one). A temporary reduction in data speed makes him turn around, making him remember where he is. He looks at the now-ruling-party monkey and shouts "Stop! How much have you amassed?". "Not much sir, I have just reached 500 crores", replies the now-ruling-party monkey. "What!", exclaims the Aam Aadmi, "I specifically told you to stop at 250 crores. You corrupt idiot! What shall I do now?"

(Note : In case my attempt at metaphor is so poor that you are still trying to remember the original story, here is it : http://www.moralstories.org/the-monkey-and-cats/)
at May 28, 2013