Quentin Tarantino has a few trademarks that can be associated with him. Firstly, he has this inimitable ability to pick a genre, study it thoroughly, and make a movie that stays completely faithful to the genre while simultaneously imparting his own uniqueness to it. For instance, his Pulp Fiction is just a collection of pulp storylines, but is presented through a revolutionary screenplay. In Kill Bill, which should have been just a martial arts fare, you learn the angst of a hit-women who has just discovered that she is pregnant, and wants to get away from her violent lifestyle. Secondly, there are the dialogues. There is probably no better dialogue writer around. And thirdly, there is his characterization. In a career that has had far lesser movies than his fans would like, Tarantino has produced numerous memorable characters. If you judge Django Unchained by these aspects, the movie is definitely a must watch. 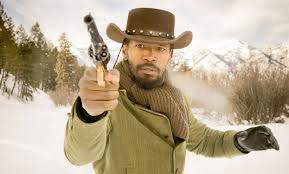 The basic plot line of Django is pretty much a part of everyday knowledge now - a black slave separated from his wife is on a quest to reunite with his wife - in a cow-boyish style. There are four pivotal characters in Django Unchained and since the the movie is completely driven by the characters, I would be attempting to describe them. Jamie Foxx plays the titular character - Django. Foxx has the tough job of portraying a black slave who feels oppressed by all whites around him and doubling up an adventurous cowboy, but he does a fairly neat job of it. Not every one gets an opportunity to stay in almost every frame of a Tarantino movie. In fact, only Uma Thurman has done it before. Foxx grabs the opportunity gleefully, and does everything right. He starts out as a helpless slave, portrays the delight of being freed (when Dr.Schlutz tells him "And now Django, you may pick your character's costume",  he replies with incredulousness "You say you're gonna let me pick my own clothes?"), and transforms to a bounty hunter and a man-on-a-mission. Unfortunately, the presence of three towering actors - Christopher Waltz, Leonardo DeCaprio and Samuel Jackson overshadows his performance.

Samuel Jackson  has the shortest screen time of the four characters. He plays Stephen - the house slave ,an elevated "nigger"  ferociously loyal to his boss Calvin Candie. As the man-in-charge of the house when his master is away, he treats the other niggers as badly, if not worse, as the "whites" do. It is curious that such people of black the race who considered the whites to be superior did indeed exist (A parallel would be the people in Indian freedom struggle, who genuinely felt that the British Empire was doing us good).  Steve's single purpose is to protect his master, come what may. When he feels that his master is letting off the "niggers" too lightly, he openly shows his outrage . Even when his master lets his guard down, Stephen maintains a hawk like vigil.  In a relatively short but important role, Samuel Jackson uses his bloodcurdling stares very impressively. Pulp Fiction, Jackie Brown and this. Tarantino and Samuel Jackson do make a wonderful pair. 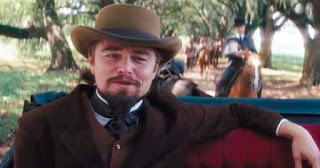 For the first time in his excellent acting career Leonardo DeCaprio plays a completely negative character, Calvin Candie. Calvin Candie is an excessively rich, spoilt plantation owner who entertains  himself by making his slaves combat until death. Quentin Tarantino has already given us two wonderful and unique villains. In Kill Bill, the titular character Bill attributes his deadly act of violence to momentary loss of temper, but he goes on to act reasonably throughout after committing this act of violence. In Inglorious Basterds, we have Col. Hans Landa,a villain who is deviously cunning and ruthless, but still makes it a point to be completely polite and charming. Calvin Candie too would go down this list of memorable Tarantino villains. Like Hans Landa, he has a charming persona that could be used to hide his ruthlessness. But unlike the Nazi, it takes only a little digging to expose Candie's real persona - that of a violent young man who is used to having his own way. He trusts his house slave Steve almost completely, but doesn't hesitate to point out who the master is when the need arises. Quentin Tarantino's asides where characters delve into seemingly unrelated, but extremely engrossing, topics of conversation are quite famous. Like Bill in Kill Bill series explaining why Superman is the best superhero ever, Samuel Jackson in Pulp Fiction reasoning out that dog meat is better than pig meat, Steve Buscemi  revealing his reluctance to tip waiters in Reservoir Dogs, Cristopher Waltz  in Inglorious Basterds comparing Jews with rats, Calvin Candie makes an interesting observation on the relative sizes of various regions of the brain in Blacks that makes them subservient. The whole movie is a cowboy film, but for as long as Leonardo Decaprio occupies the screen, he manages to completely shift the genre. With his mischievous grin and apologetic shrugs, this is perhaps Decaprio's best performance till date. 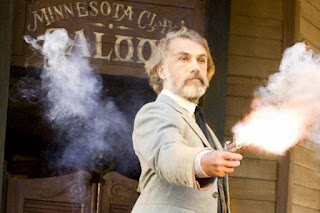 Undoubtedly, the best of the lot is Christopher Waltz, who plays Dr. King Schlutz ("What kind of doctor?", "A dentist"). Dr. Schlutz is a German born bounty hunter who strikes a mutually beneficial "deal" with Django. Christopher Waltz is probably one of the most talented actors around. Hearing him mouth Quentin Tarantino's dialogues is a pure bliss. Carrying on from where he left off in Inglorious Basterds, Waltz continues to be immensely polite. Taking his own good time to put his views across, he makes sure both the characters in the story and the audience give him their complete attention. Well read, charming and filled with liberal views, everyone (both on-screen and off it) will fall in love with Dr. Schlutz. In a movie that must have belonged to the central character Jamie Foxx, Leonardo Decaprio and   Christopher Waltz steal his thunder with their riveting confrontations. The master Tarantino has sketched the characters so well that only an adamantly evil Calvin Candie can force the genteel Dr. Schlutz to momentarily forget his manners.

Django Unchained is not without its flip sides  Coming immediately after the excellent Inglorious Basterds, comparisons are bound to be made between the two. Django does not match the very, very high standards Tarantino  has set for himself. The movie drags a little with a length of more than two and half hours. It is probably because Tarantino wanted to stay true to the genre. Having grown up watching Indian movies which broadly fall under only two categories - "Commercial movies" (which is a mix of every possible genre) and "different movies" - we may find Tarantino's attention to detail a little too elaborate. Tarantino has also adapted a fairly linear screenplay here (which is of course a rarity for him). Having said that, there are still some short and quick flashbacks ( a few of them, in my opinion, unnecessary). On the whole, if you want an enjoyable experience served in Tarantino's style, Django guarantees it for the most part. For someone who has never scene a Tarantino movie, this might  not be the right place to start.
at February 01, 2013